Sharing with you an overview of the physical and energetic potentials of:

A Lunar Eclipse occurs when the Moon is full and the Earth blocks the Suns rays from partially/fully reaching the Moon, thus the Moon is cast within the Earth’s shadow.

A Lunar Eclipse provides a quantum opportunity to release deep-seated wounds, move beyond old fears and to transcend negative patterns or traits within the shadow self.  It is time to ECLIPSE anything that maybe holding you back.

During a Lunar Eclipse it is an opportune time to do much inner-work, and illuminate yourself from the inside-out.

You will be inspired during the Eclipse/Full Moon to open your gifts to higher degrees of frequency and anchor these on the Earthly plane.  It is time to take ownership and acknowledge your divine magnificence and shine brightly from within.

The specific energy of a Lunar Eclipse is also dependant on what sign of the zodiac the Sun & Moon (who are in opposition during a Full Moon) are transiting during the Eclipse. A Solar Eclipse occurs on the New Moon, whereby the Moon moves between the Earth and Sun, obscuring Earth’s view of the Sun.

The energy of a Solar Eclipse ‘obscures’ our vision forward, such that we can take time to reflect on the present and truthfully see how this relates to our past.

The insights gained are not about dragging up old energy, or reliving painful events or experiences, but rather to positively reassess where you have been and use this knowledge to make quantum leaps on your path moving forward.

Whilst a Solar Eclipse can create upheaval in your life, this ‘forced’ opportunity to reassess or re-evaluate your life provides a profound opportunity to leap into a new sphere of existence beyond your perceived limitations.

The specific energy of a Solar Eclipse is also dependant on what sign of the zodiac the Sun & Moon (who are in conjunction during a New Moon) are transiting during the Eclipse. 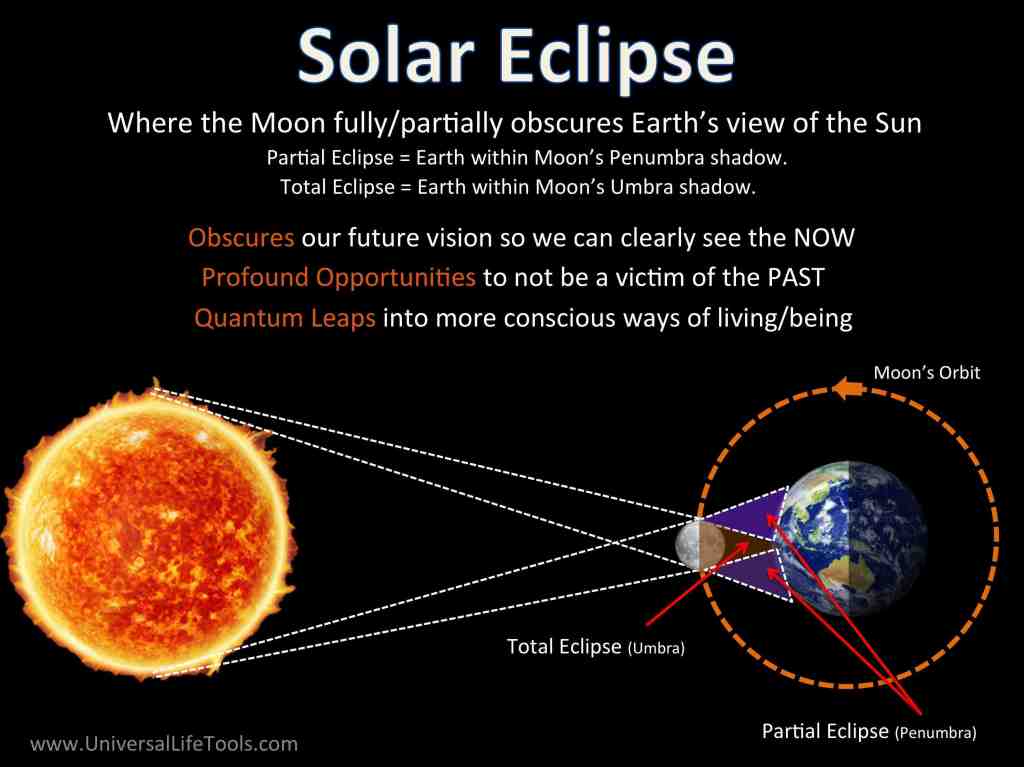 Here are a few definitions to bring a deeper understanding of the terms used when describing Solar Eclipses:

TOTAL SOLAR ECLIPSE:  A Total Solar Eclipse occurs on the New Moon, whereby the Moon moves between the Earth and Sun, TOTALLY obscuring Earth’s view of the Sun.

ANNULAR ECLIPSE:  An Annular Solar Eclipse occurs on the New Moon, whereby the Moon moves between the Earth and Sun and the Sun appears behind the Moon as a very bright ring of light (an annulus) around the dark disk of the Moon, as the apparent size of the Moon is smaller than that of the Sun.

PARTIAL ECLIPSE: A Partial Solar Eclipse occurs on the New Moon, whereby the Moon moves between the Earth and Sun and the Sun is only PARTIALLY obscured by the Moon as the Moon & Sun aren’t directly in line.   A Partial eclipse is also seen from the majority of regions of Earth outside the route of the TOTAL or ANNULAR Eclipse.  Note also that some eclipses can only be seen as a partial eclipse, because the umbra passes above the Earth’s polar regions and never intersects Earth’s surface.

A Selenion Eclipse is a rare event where the moon and the rising sun can be seen simultaneously.

During a lunar eclipse, the sun and moon are exactly 180 degrees apart in the sky. In a perfect alignment like this (called a “syzygy”), such an observation would seem impossible. But thanks to Earth’s atmosphere, the images of both the sun and moon are apparently lifted above the horizon by atmospheric refraction.

To find out how/where to view the Selenion of the 8 October 2014:
http://www.space.com/27338-total-lunar-eclipse-rare-sunrise-selenelion.html 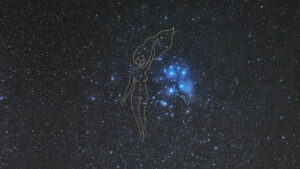