Pluto in Capricorn and Uranus in Aries square each other seven times between 2012 & 2015.

UPDATE 15 December 2014… please take a moment to hold in your heart a peaceful resolution to the hostage situation taking place in Martin Place in Sydney’s CBD.  The Uranus-Pluto Square over the 15/16 December is creating a most intense energy… but through our hearts we can remember our true states of beingness that of LOVE, PEACE, JOY & KINDNESS…

So how will this upcoming December 15/16 Pluto square Uranus alignment affect us ?  Yes you guessed it….. Change.  Change, Change & More Change !!!

I know, I know, many of you are tired of hearing this word over and over again… because it seems like CHANGE has been the only constant in recent years.   From the time Pluto first ventured into Capricorn in 2008, Uranus entered Aries in 2010, the Cardinal T-Square of Saturn-Uranus-Pluto in 2010 and the repeated squarings of Uranus-Pluto during 2012 to 2015 … change is all around us and through us.

I even did a trusty google-thesaurus search to find another word for CHANGE… it kinda sums up the energy of this time…. shift, revolution, transformation, transition, metamorphosis, reconstruction, remodelling & transmutation to name just a few.

This upcoming December 15/16 Pluto squaring Uranus, combined with the influence of the Moon (creating a Cardinal T-Square.. keep reading below for more about this) combined with the influence of Venus in Capricorn and the conjunction of the Sun & Mercury in Sagittarius… serves as a reminder that there isn’t anywhere we have to be, there is only the present.  Being in the present means connecting with the deepest most sacred space of your authentic self… thus this upcoming square is about throwing off the shackles in the present that inhibit you from expressing your divine, most sacred self in the NOW.

This reminds me of a most beautiful quote by Rumi:

Your task is not to seek for love, but merely to seek, find (and transcend) all the barriers within yourself that you have built against it. Rumi

The last few years of intense astrological alignments have provided humanity with the opportunity of really ‘seeing’ how the ego plays out in your own life and on the world stage, and discerning what is real and what is fictional imprinting within the field.  Resistence (as you may have discovered) is futile as the very nature of these alignments has been to shake things up and break things down in order for the conscious re-building of the collective field through our hearts.

As I discussed in my Shealla-Dreaming Self-Study Course, when each of us choose to stand in our AUTHENTIC TRUTH it creates a ripple in the field of consciousness (just like a drop in the ocean), this then builds to create MOMENTUM like a wave, until our collective waves build in intensity that flourish REVOLUTIONS around the planet, ultimately creating conscious EVOLUTION.  So it is up to each and everyone of us to be THAT DROP, to stand outside the box of fear based imprinting and choose to be vulnerable & courageous to stand in the truth of your unique authentic self.  This is FREEDOM of the SOUL.

You are not a drop in the ocean. You are the entire ocean in a drop. Rumi

PLUTO in CAPRICORN is about inspiring major transformations in the heirarchial structures of governments, corporations & all those in places of power. As I discussed in my book Shealla-Dreaming, ‘Pluto holds the vibration of transformation and evolution and Capricorn is about rolling your sleeves up and getting down to work… and together they influence the very foundations of governments, financial institutions, medicine, educatiaon… structures are/will break down in order to be rebuilt through evolutionary change’.

When both PLUTO in Capricorn and URANUS in Aries square each other (sit at 90 degrees of each other on a 360 degrees astrological wheel – see the image below) we are feeling an intense desire to rebel, revolt and not sit back and take it anymore.  We are so dissatisfied with the lies, deceit and propaganda, we just want to jump ship and start a new.   Yet at the same time, we know from a higher consciousness that running away is futile, as we need to work pro-actively to dismantle & tear-down and then rebuild, restructure and transform from the ground up.

In Addition to the Pluto/Uranus Square, on the 15/16 December 2014 Uranus is in opposition (180 degrees) to the MOON in LIBRA, and hence Pluto in Capricorn is SQUARING the MOON in LIBRA which together creates a Cardinal T Square… I have written more about this below… 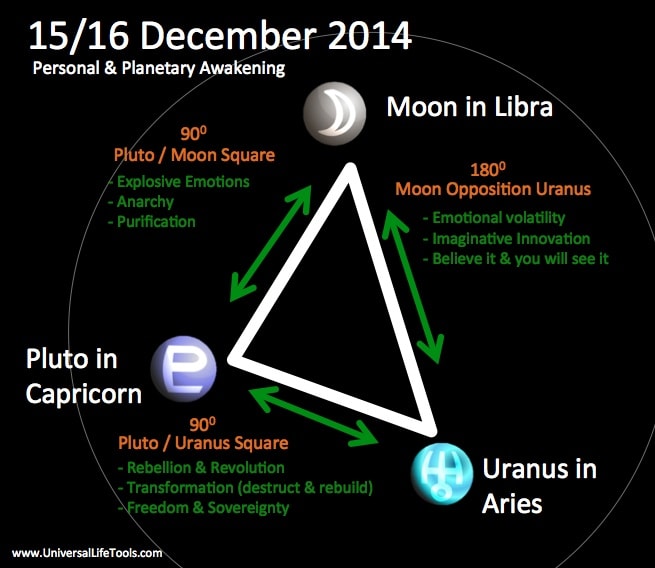 It is called a ‘Cardinal’ as the signs of the Zodiac housing the 3 planets are all cardinal – Capricorn, Aries & Libra.   Refer my April 2014 article on the Cardinal Grand Cross, for discussion about Cardinal Signs and their focus on our identity.  And it is called a ‘T-Square’ by virtue of the configuration formed by the two squares and one opposition (please refer to the Diagram below).

A T-Square is much more unstable than a Cardinal Grand Cross (again refer to my April 2014 article on the Cardinal Grand Cross), and the focus point or the Apex of the T-Square creates the intensity of the T-Square (in this case is Pluto in Capricorn).   Cardinal signs inspire us to action, to be impulsive and to drive change and fortunately Capricorn is an Earth sign, so we are inspired to take practical steps to make this happen.

As can be seen from the diagram below, on the 15/16 December 2014 Cardinal T-Square will potentially create much emotional volatility and a strong impetus to break free from the perceive limiting restrictions of our social, political, hierarchial structures.  It may feel like a volcano is building inside of your as the intensity of the T-Square peaks on the 15/16 Dec.

If you can hang in there and focus/build this intensity within, as we then come into the Summer/Winter Solstice on 21/22 December as the Sun moves into Capricorn,  combined with Uranus moving direct in our celestial skies, this will be the most effective time to channel these new found inspirations from the T-Square and implement authentic steps in your life for personal and evolutionary change. 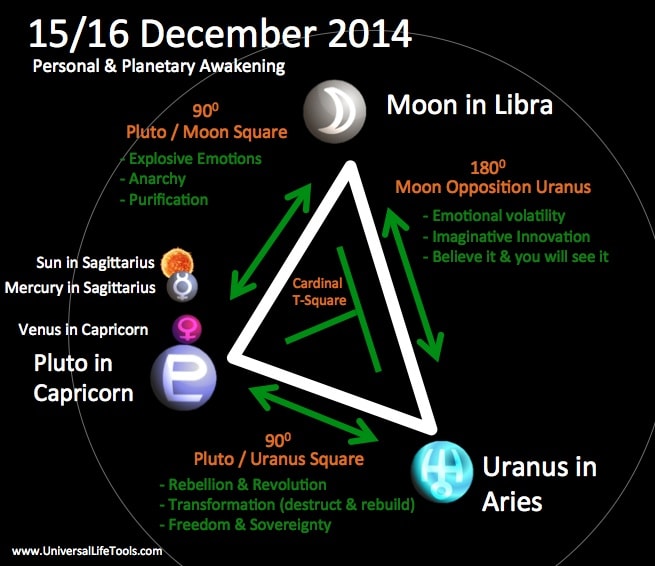 Just to add to this spectacular melting pot of energy to round off our 2014 year,  during the 15/16 December T-Square, not only is MOON forming a weak square with PLUTO, but the MOON is also forming a VERY STRONG SQUARE with VENUS in CAPRICORN (and hence Venus is also conjuncting – sitting close to – Pluto).  PLUS the Sun & Mercury are both conjuncting (sitting close to each other) in Sagittarius.   This combination creates independant thinking, ‘seeing’ beyond the illusion and transcending the charismatic glamour of the ego.

So what does this all mean ?  Quantum Evolution is not but a construct of a small collection of peoples seeing the world through rose coloured glasses… is is happening NOW, it is real !!!!   As we look around the world we can see the very fabric of our social, political, environmental and corporate structures ripping at the seams… and it is up to each of us to reweave this fabric through our hearts and work with the authentic qualities of compassion, kindness, equality, freedom, sovereignty and LOVE to evolve our planet into the golden age of consciousness.

Here are some links to some great articles on the web about the Uranus/Pluto Square, to help you consciously work with the upcoming energies of 2014/15:

Receive our Energy Reports – for FREE 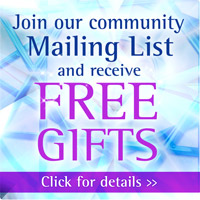 Did you like this energy report ?
If you answered YES, then we invite you to signup to our community newsletter & receive lots of free gifts… such as free meditation audios, videos and metaphysical/energy articles.

Rest assured your privacy is of utmost importance, thus your details are never sold or shared with anyone ! 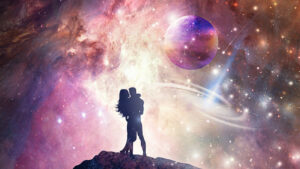 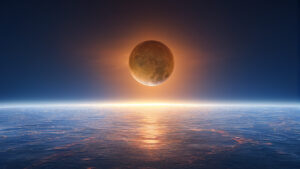 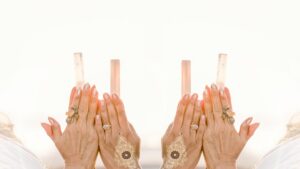