You have most probably used the term ‘once in a Blue Moon’ in reference to a rare event.   But where did this reference come from, and how does it relate to the Moon ? 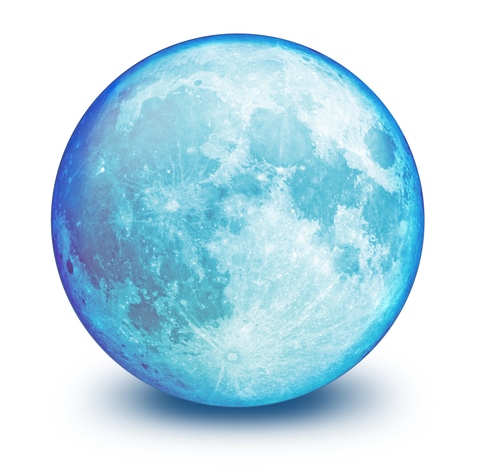 The definition for a BLUE MOON is quite confusing, and has a fair bit of history behind.

Here are 3 definitions of a BLUE MOON – from a most recent reference, to a more ancient understanding of the term through Vedic Wisdom.

How did the 2nd Full Moon in a Calendar Month come to be called a BLUE MOON ?

The March 1946 edition of  Sky and Telescope magazine, contained an article by James Hugh Pruett entitled “Once in a Blue Moon”.  In this article where he inadvertently misinterpreted/simplified the 1937 Maine Farmers Almanac definition of BLUE MOON:  “Seven times in 19 years there were – and still are – 13 full moons in a year. This gives 11 months with one full moon each and one with two. This second in a month, so I interpret it, was called Blue Moon.”   As a side note here, interestingly 1937 only had 12 full moons !

Thus whilst this definition of BLUE MOON is not technically correct, it has become the most popular definition.

The Maine Farmer’s Almanac (a calendar publication used by farmers) which has been in print since 1819, defined a Blue Moon as an extra full moon that occurred in a season.  A season normally has 3 full moons, however if there are 4 full moons in a season then the third full moon is called the BLUE MOON and the 4th moon is referred to as the last of that season.

Why would one want to identify the third full moon in a season of four full moons? The answer is complex, and has to do with the Christian ecclesiastical calendar.

Some years have an extra full moon—13 instead of 12. Since the identity of the moons was important in the ecclesiastical calendar (the Paschal Moon, for example, used to be crucial for determining the date of Easter), a year with a 13th moon skewed the calendar, since there were names for only 12 moons. By identifying the extra, 13th moon as a blue moon, the ecclesiastical calendar was able to stay on track.

Definition 3:  The 2nd Full Moon within the Same Astrological sign
An Astrologer friend of mine – Richard Giles – brought this 3rd definition to my attention.  Personally I feel this more truly reflects the deeper energetic intention behind a Blue Moon.

Here is an extract from an article that Richard published over a decade ago.

The true Blue Moon comes from Indian Vedic tradition going back thousands of years and occurs when the Moon is full twice in the same astrological sign.

Time was measured in indigenous cultures according to moon cycles, change of seasons and the period between equinoxes and solstices. The Christian pope came up with the idea of standardising the calendar with various 28 to 31 day months (the word ‘month’ comes from Moon).  That was in 1582.   Hence the Gregorian calendar is only a mathematical invention that divides up days into useable groups (ie Months) within a Solar Year. It’s a convenience only, it has no cosmic validity.  It does not relate adequately to natural cycles, whereas the astrological position of the Moon is far more important in terms of Moon cycles and in terms of the energy signature of each Moon phase. The true Blue Moon is much much older concept going back to the Vedas.

The colour blue and its importance was derived from the skin colour of Lord Krishna who is revered as the divine flute player and the special energy of the second Moon was considered ‘blue’ or divine by Indian religious scholars and priests. Thus they celebrate two Full Moons in the one sign as a Blue Moon period and have large religious ceremonies to acknowledge the importance of the second one.

Because the Indian astrological tradition is a little different from the western tradition and they use a sidereal system based on where the constellations actually sit in the heavens then you may find the dates will vary slightly. But they have the origins of true Blue Moon celebrations in their culture which goes back thousands of years.

Please also visit the following webpages for a more detailed understanding of our Planetary, Lunar & greater Celestial transits throughout 2019: