Due to the tilt in our Earth’s axis of rotation, throughout the calendar year the Sun appears to rise and fall in different regions of the Sky, creating the Seasons of the year.  This is not due to the Sun moving, but due to the Earth moving relative to the Sun.

The four season’s come into fruition by the two Equinox’s and the two Solstices each Solar year.  Below is a summary of the energy of the Equinoxes & Solstices per solar year and the potential they create within our lives here on Earth.

Also, please refer to my article ‘The Cosmic Breath‘, on how the four seasons of our solar year represent the flow of the inhalation and exhalation of the great Breath of Creation.

During the December Solstice (Summer in Southern H., & Winter in Northern H.) due to the tilt of the Earth, the Arctic Circle (Northern Hemisphere) will experience 24 hours of darkness whereby the Sun does not rise and Antarctica (Southern Hemisphere) will experience 24 hours of light whereby the Sun does not set.

Overall, where ever you are on Earth, the Summer/Winter Solstice represents an opportunity to celebrate your LIGHT.  As we move into the threshold of a new cycle, it is a time to come together with all humanity through the LOVE of our LIGHT and send a wave of unifying peace through the Crystalline Wisdom Field of our Earth.

During the Solstice, consider lighting a candle and honouring the LIGHT of joy, blissful abundance, compassion, peace and kindness illuminating your Heart and entraining the field of the Infinite All.  OmAhOm.

Please note:  The references of above to the houses of the Zodiac for the Equinox & Solstice do not refer to Sidereal astrology which takes into account the actual position of the Sun in relationship to the Zodiac Houses.  Please visit this website for more info:  www.astroplot.com/AstrologyvAstronomy.htm 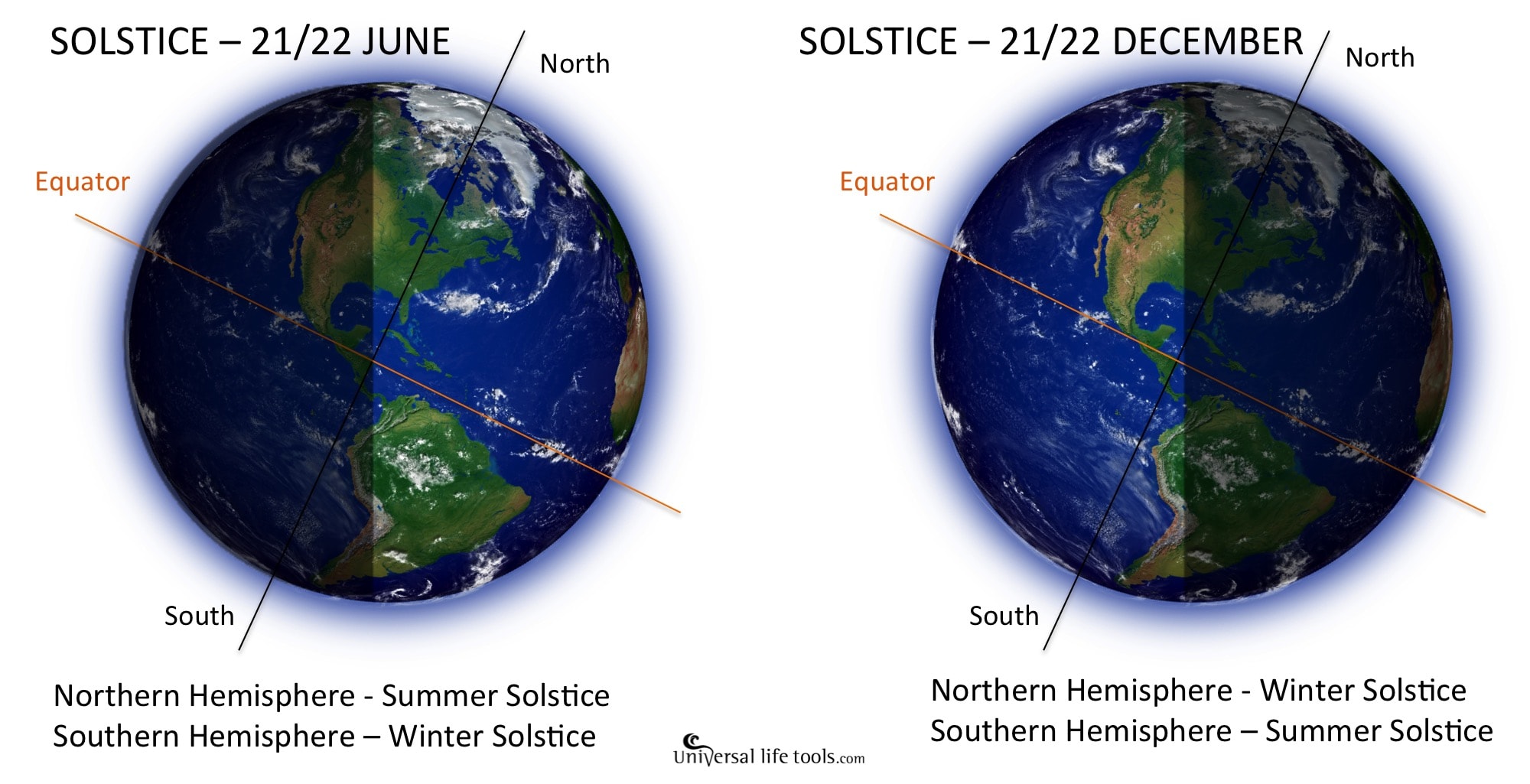 The Equinox is where day and night are of equal length – the energies coming together as one – Heaven & Earth, Spirit & Matter.  At the Spring Equinox we prepare for our re-birth and awakening from the sleep of winter (the great exhalation of the Cosmic Breath) and at the Autumn Equinox we are bringing our energy inward, in preparation for the rest ahead (the great inhalation of the Cosmic Breath).  It is these polarities that make up the whole.

The Equinox is a powerful portal gateway of ascension into higher levels of consciousness.  At this time of unity, the feminine & masculine merge as one, opening opportunities to unify duality within our selves, and expand our awareness to greater dimensional/light octave levels.

During our SEPTEMBER SPRING EQUINOX (in the Southern Hemisphere) we prepare for our re-birth and awakening from the sleep of winter.  The long inhalation of the Great Cosmic Breath reaches its peak at the Spring Equinox and then subsequently transitions into the ‘out breath’.  The Spring Equinox until the Summer Solstice is the long exhalation of the Great Cosmic Breath, the budding, flowering and fruiting of plants, new life springs into action and a sense of joyful expression out into the world takes place.

During our SEPTEMBER AUTUMN EQUINOX (in the Northern Hemisphere) we are bringing our energy inward, in preparation for the rest ahead.  The long exhalation of the Great Cosmic Breath reaches its peak at the Autumn Equinox and then subsequently transitions into the ‘in breath’. Autumn Equinox to the Winter Solstice is the long inhalation Cosmic Breath, whereby energy is drawn inward, within us and within the Earth. Animals hibernate, seeds sleep and spirit communes with Earth’s Heart for renewal, regeneration and healing.

Thus our SPRING / AUTUMN EQUINOX represents our moment of TRANSITION, the moment of stillness between the in & out breath, day and night are of equal length – the energies coming together as one – Heaven & Earth, Spirit & Matter, Mind & Soul.

This transitionary moment of the Spring / Autumn Equinox is a moment of stillness, a space between the words, a space of UNITY.  It is the moment of spontaneous healing and a synergistic moment of miracles & pure ecstasy through the ONENESS of DIVINE LOVE. 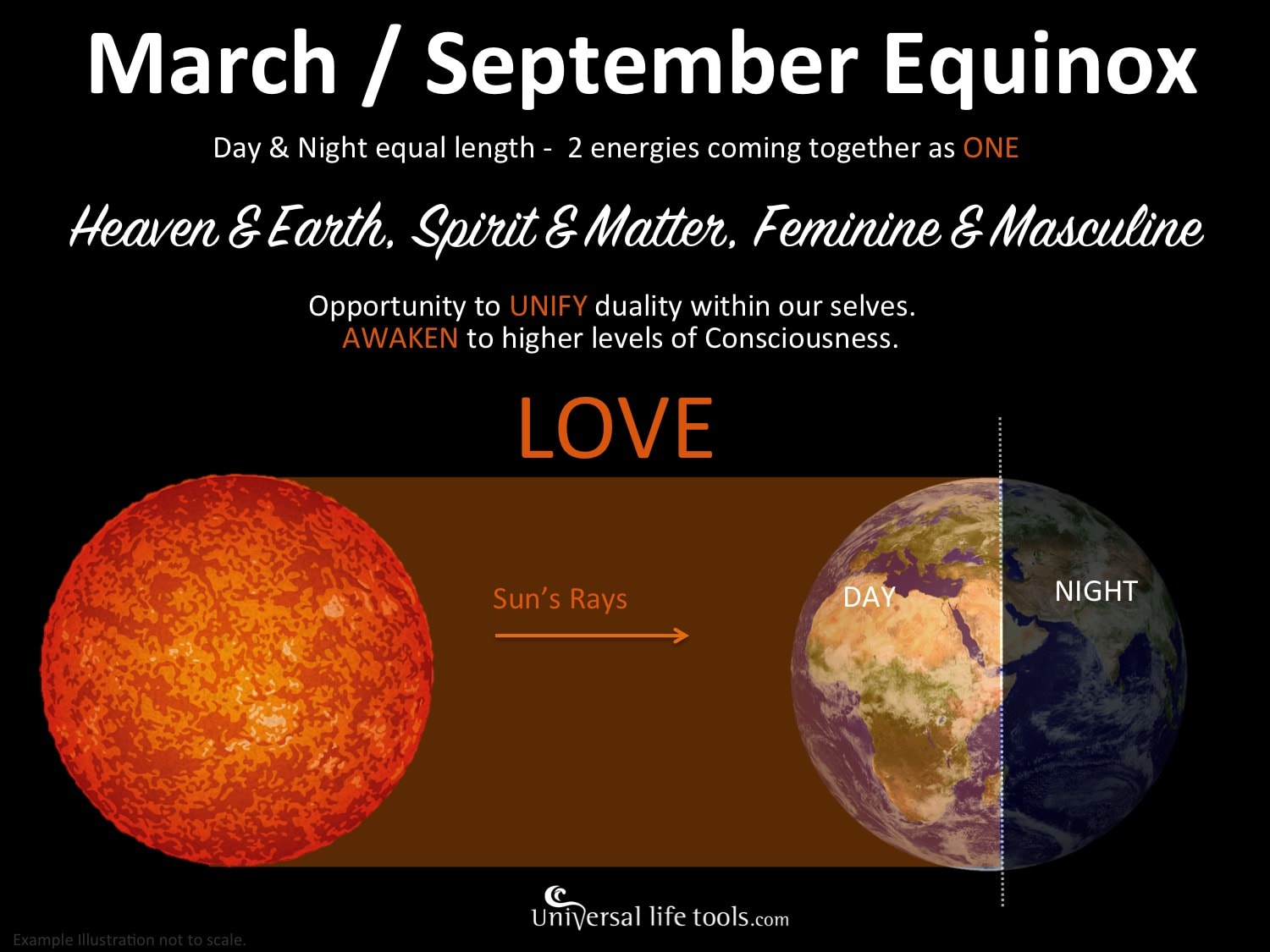 In addition, at the time of the Equinox, as the Sun is over the Equator, Earth’s Heart (Hertz) Frequency increases creating an inverse decrease in Earth’s magnetic field.   Ultimately, as the veil between the physical/spiritual worlds diminish, through our HEARTS a portal opens into DIVINE BEingness and we are offered an opportunity to step into illuminated states of FREEDOM, JOY & BLISS. 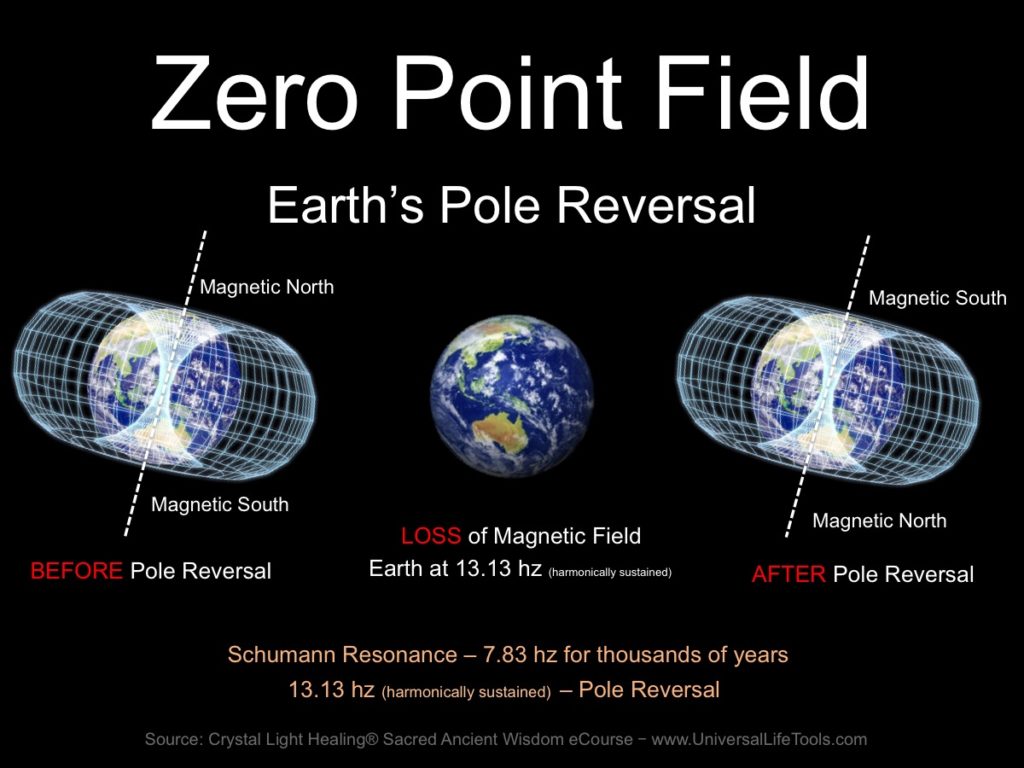 During our Equinox (& Solstice) alignments, as the Earth’s Heart Beat increases and the magnetic field decreases, we also come one step closer to a full Earth Pole Reversal – and humanity’s individual/collective Heart Toric fields (in combination with Galactic Toric Field) that will quantum leap ALL life forms into the next phase of evolution… Read More > 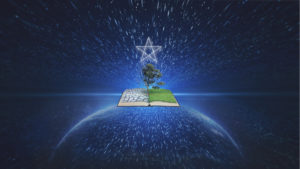