Back in September 2020 (which seems a life-time ago now!), I wrote an article on The dangers of the Single Story….

Never have I found myself so engulfed in living a ‘Single Story’. The ONE story that explains this COVID moment. Deviate from the Single Story narrative and you will rapidly find yourself shamed, ridiculed, publicly humiliated and ultimately censored at best. At worst arrested and jailed for the audacity to step out of line. Legality is becoming a matter of power, not justice. – The dangers of the Single Story

Some 9months later (the length of a women’s pregnancy), nothing much has change.  In fact THE SINGLE STORY not only remains, but is also erasing traces of any other story.   The book 1984 now reads like a pre-cognisant non-fiction account of our current times!

Whilst this dystopian moment feelings gravely dark, HOW you embrace & respond to this moment is what weaves the future of our world, our Beautiful World that our Hearts know is Possible – thank you Charles Eisenstein.

Responding to this moment through the Heart enables humanity to Quantum Leap into a more awakened consciousness, to experience ourselves not just living on the Earth, but living OF THE EARTH, and that Nature is our truest & most Divine Nature.   As I talk about in depth in Lightrition your Life, the Heart is our enchanted vessel of flow with the Cosmos, the Divine Mind of Creation, the Cosmic Heart.  Living life through the Heart helps you navigate the challenges of the word, to discern truth from falsehoods, and guides you to rise above the ‘mind-control’ employed by those that have forgotten their inherent Divinity.

Science can in fact measure the electro-magnetic field of our Heart.   The Electrical Field of the Human Heart is about 60 times greater in amplitude than the electrical activity generated by the brain.  Furthermore, the magnetic field produced by the heart is more than 100 times greater in strength (can be up to 5,000 times) than the field generated by the brain and can be detected up to 3 feet away from the body, in all directions.    And this Electro-Magnetic Field communicates with the environment (Earth, Solar System, Galaxy etc), in a two way flow of LIGHTRITIONal information, that supports the body to heal & thrive, whilst guiding the Soul to greater awareness & experience of LOVE

As I talked about in my Soul Evolution Course  & my Crystal Light Healing® Sacred Ancient Wisdom Course, just like the Transcendental Meditation experiments of the 1970s showed, when collectively Humans open their Heart to LOVE, to both give & receive in reciprocity with the Divine, we have the capacity to evolve into our inherent 5D states of Consciousness, and live as beings of enLIGHTened awareness. Sharing below insight into how our MINDS are being twisted on Earth, to keep humanity controlled within states of fear.  And it is this MIND control that induces good Humans to do BAD THINGS, and WHY people blindly follow authority in order to be liked, loved, and to feel like they belong.

Awareness is the key, and keeping centred in your Heart is the antidote to the dark medicine of Mind Control.  I share the following in the hope that you awareness and intelligent discernment of what is happening at this time of Earth, helps you to rise above the darkness into the LIGHTness of a grander truth.

Remember… your HEART never lies, only the mind/ego can play games with you have you doubt your Heart.   If you need guidance to help you live life through your Heart, all of the teachings through our Wisdom School are based upon ‘The Power of the Heart through the Law of Love’.    This is the future of Humanity, this is OUR collective future, what will you choose ?

The Art of Media Manipulation

On the 8th June,  Dr Sherri Tenpenny testified before the Ohio Congress, in support of a BILL that would prevent Schools & Businesses from making the COVID Jab Mandatory.   After her Testimony, Dr Tenpenny was targeted by subversive corporate, monopoly-media propaganda strategies, which have quietly replaced organic journalism over the last 25 years.   The media completely dismissed her factual evidence, and instead employed manipulative techniques to make people think she was ‘stupid’.

The video below show snippets of how the media employed these tactics against Dr Tenpenny.   You have to ask the question, who owns the media, and who is pulling the strings to mind-control people in believing the one story ?   With Canada just having passed the C-10 Bill, which effectively gives the Canadian Government vast powers in Internet Censorship & gagging free speech… your Heart Wisdom is needed now more than ever!

My advice is turn off Main-Stream-News, read widely from Independent Journalists, Politicians & Doctors that are prepared to break ranks with those imposing gag orders on speaking truth.   And above ALL, listen to the Wisdom of your HEART, because that is the ultimate SOURCE of your Truth.

I have also embedded Dr Tenpenny’s video below too, just in case you would like to see the full testimony for yourself.  I feel the Question & Answer at the end was really valuable.  And you can view more of Dr Tenpenny’s videos here. 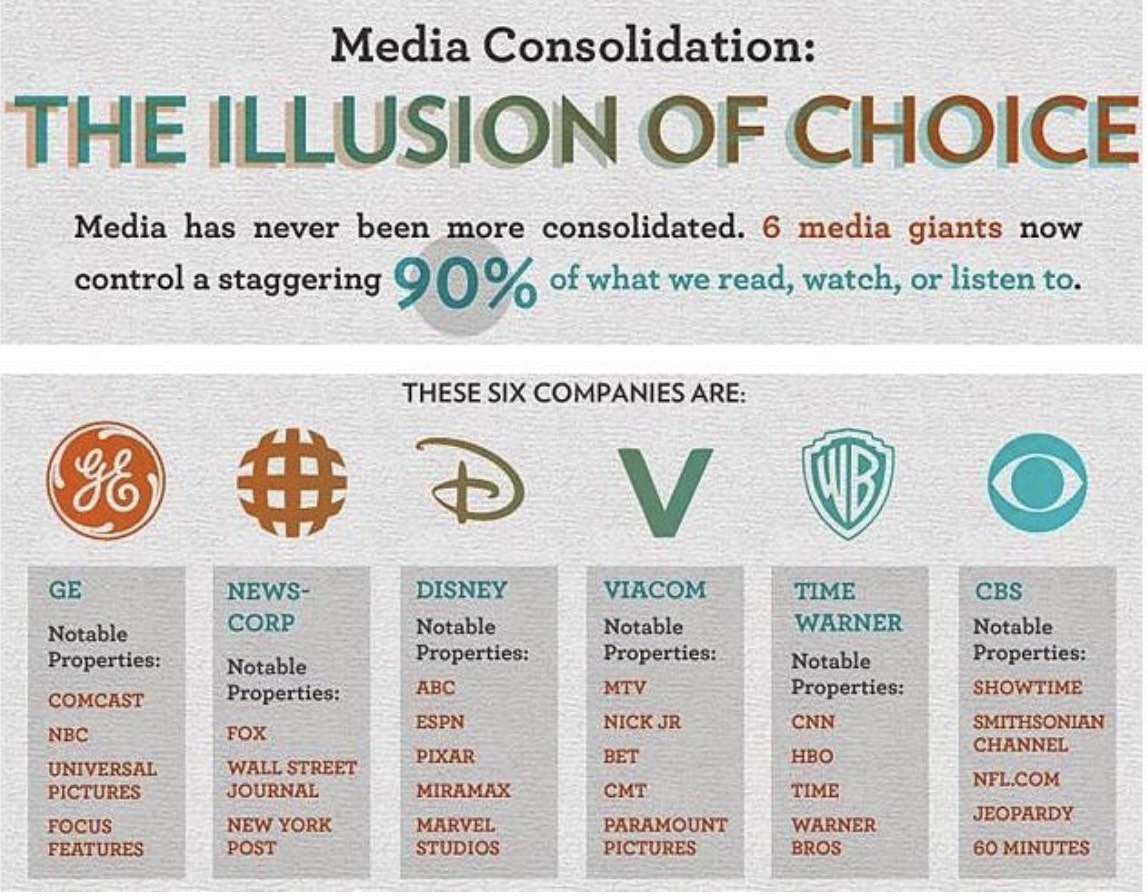 In 1962, Yale University psychologist Stanley Milgram tested the limits of human obedience to authority.  The Milgram experiment was conducted following the trial of Nazi Adolf Eichmann, who used the Nuremberg defense, or “befehl ist befehl,” which translates to “an order is an order”.  The Milgram experiment clearly showed that people would act against their own judgment and harm another person to extreme lengths simply because they were told to do so.

The basis of the Milgram Experiment had ‘Teachers’ deliver electric shocks to ‘Students’ under the authority of the Administrator.   Unbeknownst to the ‘Teachers’, the ‘Students’ we actors, that would moan & groan with pain each time the shocks were delivered with increasing intensities.  Even as ‘Students’ pleaded for the shocks to stop every time they answered a question incorrectly, the ‘Teachers’ continued to deliver the painful shocks (even though they were uncomfortable doing this), in obedience with the Authority Figure – The Administrator.   Read the full study of Behaviour & Obedience here.

This experiment outlines WHY there are good people in the world that are doing horrendous things to humans at this time – such as injecting poisonous jabs that have been shown to have severe adverse events or even death.   Or WHY good people such as many Doctors are hiding the pain & suffering of their patients, to remain loyal to an Authority Figure that is telling them what to do.

And a little more from Yale, this study conducted in July 2020 was to find ways to coerce people into getting the COVID Jab.   Through a study of 4,000 people it ‘tested’ effectiveness of using messages such as guilt, to embarrassment, getting your freedoms back etc.   It’s not hard to see how our MSM, Governments & Health Authorities are using all of these dangling carrots & more to make people become submissive to authority.

Project MK-Ultra was a series of CIA-led experiments on mind control. The experiments began in 1953 and continued into the late 1960s. CIA researchers subjected thousands of U.S. and Canadian citizens to experimental tests, including electric shock therapy, brain surgery, and LSD dosing, in order to identify methods for controlling human behavior.

The experiments were conducted without the full consent of the subjects. Many subjects were in vulnerable positions like incarceration or psychiatric treatment.  The federal government was sued and brought to trial multiple times over the resulting deaths and injuries.

The CIA has appalling history with Mind Control, and the question begs:  what hand do they have to play in mass-mind-control of this COVID moment ?   Could this also be why so many people are staying asleep, or are trapped in Stockholm Syndrome to the point of defending those that are purportrating the crimes against humanity ?

Operation Mockingbird was [is] a CIA project that recruited journalists since the 1950s to write fake stories promoting government ideas while dispelling other stories.  The operation infiltrated news outlets, the greater media and even Hollywood.   The aim was to ‘control’ the population toward certain life-choices that met the agenda of the Government of the day.

The CIA’s role in the current flood of censorship we are experiencing during COVID may be more significant than most people imagine. In the Off-Guardian article, “Opening the CIA’s Can of Worms,” Edward Curtin highlights the close ties between the CIA and corporate mainstream media.

In the past year, licensed medical doctors and award-winning scientists have undergone the modern version of being tarred and feathered online, followed by expulsion from their web-based communities for the crime of asking commonsense questions and speaking truth to power.   Again the question must be asked:  Is Operation Mockingbird still very much part of our world today ?

The following video includes excerpt from The Church Committee – a U.S. Senate select committee in 1975 that investigated abuses by the Central Intelligence Agency (CIA), National Security Agency (NSA), Federal Bureau of Investigation (FBI), and the Internal Revenue Service (IRS). The Senate hearings exposed that the CIA was planting fake narratives in foreign and domestic media to persuade the public opinion.The program was called Operation Mockingbird and there are no evidence that they discontinued the effort.

In a covert affair originally dubbed Operation Overcast but later renamed Operation Paperclip, roughly 1,600 of these German scientists (along with their families) were brought to the United States to work on America’s behalf during the Cold War. The program was run by the newly-formed Joint Intelligence Objectives Agency (JIOA), whose goal was to harness German intellectual resources to help develop America’s arsenal of rockets and other biological and chemical weapons, and to ensure such coveted information did not fall into the hands of the Soviet Union.

The economic “intellectual reparations” taken by the U.S. and the U.K. (patents and industrial processes) have been valued at some $10 billion dollars.

The most famous beneficiary of Operation Paperclip was Wernher von Braun, who headed Nazi missile research, was a Nazi Party member, and then went to work for the U.S. National Aeronautics & Space Administration after the war. His expertise is widely cited as one reason U.S. astronauts were the first to reach the moon. Dozens of chemists were also recruited to work on chemical weapons at Edgewood Arsenal in Maryland and on synthetic fuels with the U.S. Bureau of Mines. The British Army had a similar program called Operation Matchbox. Working with other scientists, these former enemy chemists went on to help design, militarize, and stockpile next-generation nerve agents until the Chemical Weapons Convention entered into force five decades later, in 1997.

Apart from the abhorrent act of ignoring the War Crimes of these German Scientists & Doctors that were re-homed in America, could the brains [knowledge] that were once behind the Nazis’ once-indomitable war machine now be part of a grander plan in play in this moment?  Looking back in our History for example, could the Nazi repatriation have led to the horrific chemical weapons that were later used in Vietnam, requiring billions of dollars to clean up?

I know this seems very dark indeed, and maybe not a rabbit hole you feel like travelling down… but maybe keep this in the back of your mind whilst you are engaging with your Heart.

A group of 104 Rocket Scientists at Fort Bliss, Texas 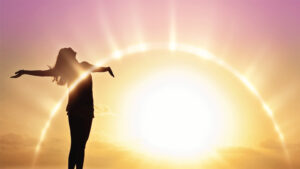 Leading up to the peak of our Lion’s Gateway Portal, our Leo New Moon reminds us NOT to PLAY SMALL just because the critics of ... 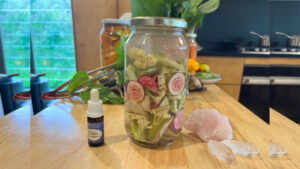 Each year on 25 July, we celebrate our Day out of Time, the last day of the 13 Moon Mayan Galactic Calendar.  ...

Bee Heaven in our garden this morning thanks to ou

Inviting you to join me LIVE on 8:8 where together

Feeling this today, alive & all lit up 🔥 https:

A place to nourish. Join us: https://universalli

Sunday morning in the garden is one of my favourit